In Kobe, one of the first cities in Japan with an established port, Western culture began spreading among citizens earlier than in other parts of Japan.

Accordingly, citizens of Kobe have long been familiar with not only Japanese cuisine, but also breads, beef, and other types of Western food. In addition, while Kobe City has a large-scale port, the city also has large agricultural land near a rich fishing ground. Both agriculture and fisheries are prosperous in the city, meaning there is an environment in which a wide variety of fresh food is available.

Kobe beef has been continuing to fascinate gourmets in the world. Kobe Beef is a harmony of delicate, dignified sweet lean meat and the taste and fragrance of melt-in-your-mouth fat. The secret behind its deliciousness is its so-called “shimofuri” fat marbling. The “sashi” fatty content of the meat itself will actually begin to dissolve at low temperatures. This means that it will literally melt in your mouth.

Hyogo Prefecture, where Kobe is located, accounts for 80% of all the cultivation of Yamada-nishiki, the king of rice for making sake in Japan. The area is Japan’s sake mecca, ranking number one in sake production in the nation. At present, there are 27 sake breweries are continuing with operations in the area, nicknamed “Nada Gogo”.

Locals eat locally grown ingredients. We dispatch Kobe farm and marine product and food and extend lifestyle of farm to table. In relation to the connecting a consumer and a producer continuously, we hold farmer’s market then we has offered opportunity to some guests to feel farm to table of Kobe. 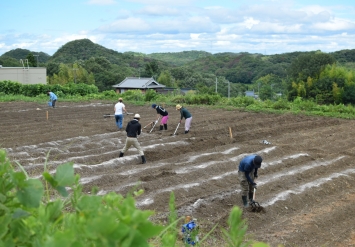 In many countries around the world, the past decades has seen the number of farmers & food producers go down. Hard work, low income. Farmland does no longer go automatically from parents to children.In Japan,...