Blended with herbs, olive oil dishes and seafood, and enriched with tastes of different cultures lived in the city for centuries, Aegean cuisine is among the hallmarks of a healthy life in Izmir.

In short, it is the cuisine of healthy and delicious food blended with the food and beverage culture of Cretan, Albanian, Thessaloniki and Bosnians who came to the city by exchange or migration, Sephardic Jews who have been living here for 500 years, Levantines whose roots reaches out to Europe, Greeks, Armenians, and, of course, the people who was born and raised in Izmir.

Fertile soils that grow thousands of different herbs, vegetables, and fruit whether it's spring or winter, pure seas inhabited by various kinds of fish and seafood, and olive, nature's biggest gift to Aegean, and its curative juice, olive oil, have been the main actors of Aegean cuisine for centuries.

Urla, the ancient city of Klazomenai, hosted the world's oldest olive oil workshop in the 6th century BC.

Street food that you encounter frequently in Izmir should be kept in mind as well. "Kumru," "boyoz," "lokma," "midye," "kokoreç," and "söğüş" are the alternatives for those looking for a different taste. And let us note that the spices has a special place in Izmir food culture.

Izmir Metropolitan Municipality initiated the Peninsula Project with the sustainable rural tourism goals. The initiative practices several projects, including Gastronomy Tourism, where agriculture and tourism intersect. The practices are united under the Peninsula Tour Routes; including Vineyard and Olive Routes which address the visitors by appealing to their taste buds where they can tour around the vineyards and even wine tasting. The Peninsula Project, as a whole, also promotes the gastronomy tourism by the virtue of thematic markets, agricultural training and local product geographical marking registries. At the eco-bazaars in the villages and districts along the route, fresh fruits and vegetables can be tasted and local delicacies can be discovered.

International Urla Artichoke Festival are held in cooperation with Izmir Metropolitan Municipality, Urla Municipality, Department of Culinary Arts and Management of Izmir University of Economics and the Network of Good Food Cities of the World, Délice since 2015. During the festival, artichoke meets with its lovers in workshops of local and foreign chefs, exhibitions and panels. The International Urla Artichoke Festival contributes a strong acceleration to Urla rural development and support for sustainable agriculture as well as the attractiveness of the peninsula for gastronomy tourism.

The International Gastronomic Tourism Congress is organized in Izmir every December concurrently with Travel Turkey since 2015. The aim of the congress is to connect the leaders in the field of gastronomy with experts on tourism as well as the educators; discussing the relation between life culture and gastronomy; and how this relation effects the improvement of tourism in the area. 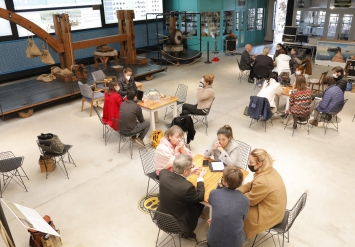 After 18 months of virtual gatherings, members of Délice Network gathered in Izmir, Turkey, at the end of November 2021 for a great conference.

Lisbon presents its assets in Izmir

For the 4th edition of the International Gastronomic Congress in Izmir 2 between 6 – 8 December 2018, Lisbon will be the guest city, taking the stage after Torino who was the 2017 guest.